In a study conducted at the University of Pennsylvania’s School of Veterinary Medicine and published recently in an open-access article in the journalEvidence-Based Complementary and Alternative Medicine1, dogs with hemangiosarcoma — an aggressive, malignant cancer that develops in the cells of blood vessels – were given a compound derived from a type of mushroom,Coriolus versicolor.

According to researchers, the patients given this compound had the longest survival times ever reported for dogs with this form of cancer. This is certainly promising news, as this mushroom compound could offer an alternative to chemotherapy or a complementary treatment to traditional cancer therapies for dogs and people.

Coriolus versicolor, which goes by a variety of names including Trametes versicolor, Polyporus versicolor and the Yunzhi mushroom, is a common mushroom found throughout the world. “Versicolor” means “of several colors.” This mushroom is also commonly referred to as turkey tail because it looks a bit like the tail of a wild turkey. 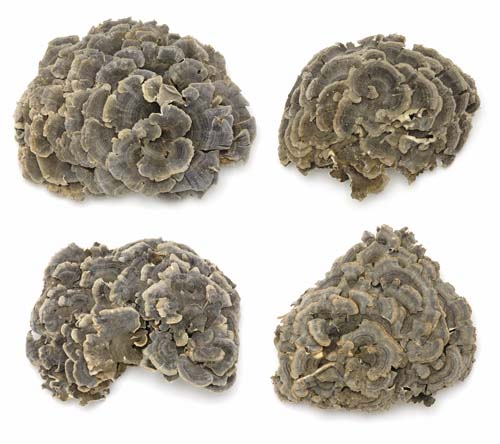 Coriolus versicolor has been used as a medicinal mushroom in traditional Chinese medicine for over 2,000 years. The substance in the mushroom believed to be beneficial in fighting cancer is polysaccharopeptide, or PSP.

So Penn faculty members Dorothy Cimino Brown and Jennifer Reetz set out to discover how long dogs with naturally occurring hemangiosarcoma lived when given the mushroom compound, brand name I’m-Yunity. Hemangiosarcomatypically affects the spleen in canines, and it is commonly seen in Golden Retrievers and German Shepherds.

The study involved 15 dogs with the disease. They were separated into three groups of five, and each group received a different dose of a formulation of PSP, either 25, 50 or 100 mg/kg/day. The dogs’ owners gave the capsules daily, and once a month they brought their pets to Penn’s Ryan Veterinary Hospital for bloodwork and ultrasounds to measure the progress of the cancer.

Based on the factors the researchers were assessing, which was how quickly the tumors developed and/or spread and how long the dogs lived, the study results suggested the mushroom compound was effective in fighting the cancer.

Researcher Cimino Brown had this to say:

“We were shocked. Prior to this, the longest reported median survival time of dogs with hemangiosarcoma of the spleen that underwent no further treatment was 86 days. We had dogs that lived beyond a year with nothing other than this mushroom as treatment.”

The study showed no statistically significant differences in survival between the three dosage groups, but the median survival time was longest in the 100 mg group at 199 days.

The results were so astonishing the researchers asked their Penn Vet pathologist colleagues to reconfirm from tissue biopsies that the dogs really had hemangiosarcoma (they did).

Preferable to Chemotherapy for Some Pet Owners

Many owners of dogs with hemangiosarcoma opt out of chemotherapy treatments. Chemo for this disease doesn’t dramatically improve survival time, is expensive, and requires several trips back and forth to the vet, which is stressful for both pet and pet owner.

Many parents of sick dogs feel that overall, chemo treatments decrease their pet’s quality of life. So an effective mushroom compound which is less expensive than chemo and also has no reported adverse side effects may help dog owners extend their pet’s life without regular trips to the vet.

Cimino Brown and Reetz are planning further trials of the Coriolus versicolorcompound in dogs with hemangiosarcoma to confirm and refine their results. These studies will compare the compound to a placebo for dogs not undergoing chemotherapy, and will also evaluate PSP treatment against traditional chemo treatment.

“Although hemangiosarcoma is a very sad and devastating disease,” Cimino Brown said, “in the long term, if we prove that this works, this treatment can be a really nice alternative for owners to have increased quality time with their pet at the end of its life.”